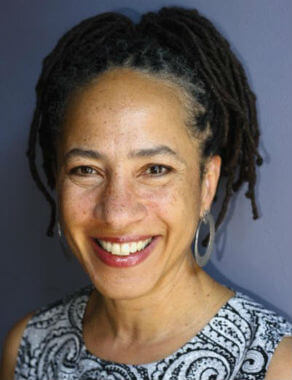 Lorene Cary’s novel, If Sons, Then Heirs (Atria Books, April 2011), recounts a love story for our time while exploring a searing racial history that haunts—and impoverishes—its unforgettable characters. Publishers Weekly calls it: “an absorbing and moving tale.” Cary’s other books include: the best-selling memoir Black Ice, an American Library Association Notable Book for 1991 often taught in colleges and high schools; The Price of a Child, a 1995 novel chosen as the first One Book, One Philadelphia selection; Pride, a contemporary novel, and FREE! Great Escapes on the Underground Railroad, a collection of true-life stories for young readers. Cary’s essays have appeared in publications including Newsweek, Time, Essence, and O Magazine.
The President’s House memorial on Independence Mall in Philadelphia includes five videos, shot from Cary’s original scripts, depicting the lives of nine enslaved Africans in the household of President George Washington as well as the free black men and women who helped two of them run to freedom.
Cary founded Art Sanctuary in 1998 to create unique programs of excellent African-American arts and letters in urbanPhiladelphia that have involved up to 15,00 participants a year. In 2012, she stepped down as director, passing the baton to new leadership.