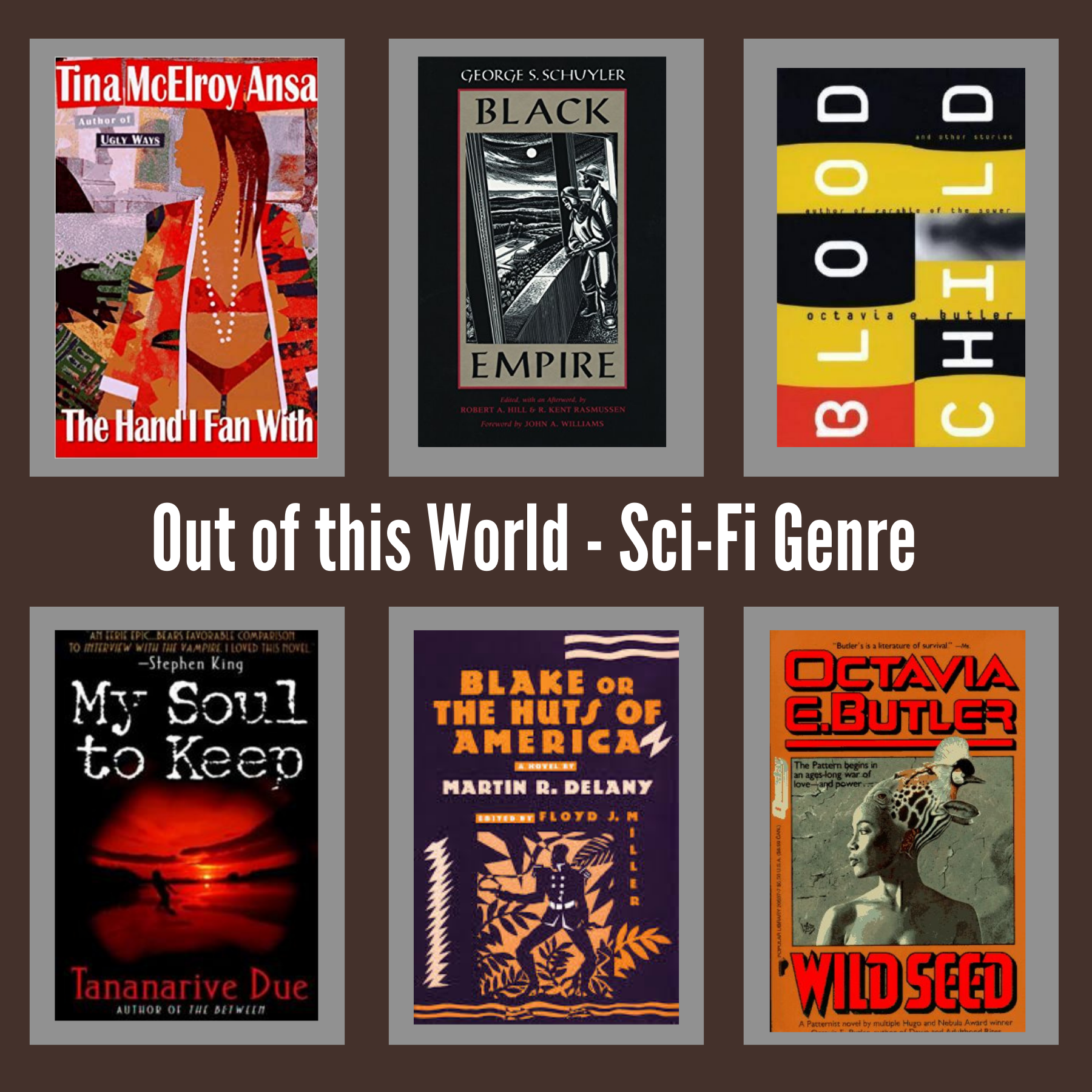 Check out Go On Girl! Book Club’s Bookshelf through the years by genre each month

When Go On Girl! Book Club started in 1991 twelve book loving and reading women got together to discuss books written by Black authors. Interesting that each one of the original group of women (three who are still part of the book club) liked different genres of books which ended up being the makeup for our reading list. Go On Girl! Book Club reads a variety of genres from mystery to social commentary. The goal was to expand our members reading with a variety of genres and introduce as many Black writers as we could to everyone. Here we are going to explore the books we’ve read and the authors we’ve discovered over the years.

Out of this  World

The Science Fiction and Fantasy Genre

Early writers in this genre wrote about the cruel realities they faced. In Martin R. Delany’s Blake, or Huts of America (1859), a Black male protagonist leads a slave insurrection in some Southern states and Cuba. Sutton E. Grigg’s distorted premise for Imperium in Imperio (1899) involves a secret society of Black men planning to take over Texas and form a separate Black government. In the mid ‘30’s George Schuyler played out his utopian fantasies in weekly installments he wrote for the Pittsburgh Courier, where he worked as a correspondent. These installments were published in 1991 as Black Empire (1936 and reissued in 1993) that focuses on a secret organization comprised of the best Black scientists and engineers. While Whites fight among themselves in battles instigated by the secret organization, the Blacks implement a plan to overthrow the government so they can create their worn.

Supernatural works like Charles Waddell Chesnutt’s stories in Conjure Woman (1899), are rooted in Black folklore and magic. This theme stands the test of time and shows up in many writer’s stories. Tina McElroy Ansa frequently takes her readers for a walk on the other side via characters with supernatural powers or characters who narrate from the dead. In her book, The Hand I Fan With 1996), Lena conjures up Herman (her man), a ghost who teaches the generous community caretaker how to take care of herself. The spirit at the center of Toni Morrison’s Pulitzer prize-winning novel Beloved (1987) is the ghost for which the novel is named.

Scientific fiction, meanwhile, refers to works created with a real scientific theory or technique in mind. Science fiction does not always feature creatures from another planet, nor is it always set in the future or in another dimension. The most successful African American sci-fi writers are Samuel R. Delany and Octavia Butler, both winners of the genre’s Nebula and Hugo awards. Delany’s first novel, Jewels of Aptor (1962, looks at the destructive capabilities of technology. Octavia Butler’s Patternmaster was the first of a five-novel Patternist saga. Butler’s work explored racial and sexual awareness, genetic engineering, advanced alien beings, nature and the proper use of power.  In Blood Child (1995) Butler offers commentary explaining her inspiration for each story.

Today outstanding Black writers in this genre include Tananarive Due My Soul to Keep (1997) Nalo Hopkinson Brown Girl in the Ring (1998) Brandon Massey The Other Brother (2006) Tomi Adeyemi Children of Blood and Bone (2018).

What Black speculative fiction writers have you discovered that we should know about?